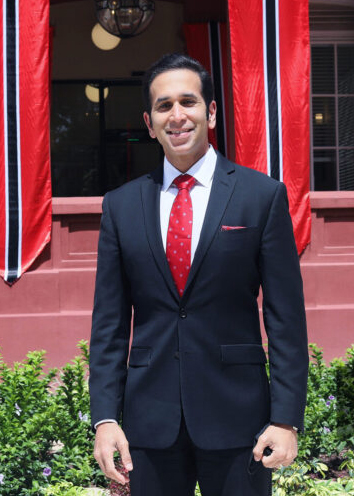 Mr. Faris Al-Rawi obtained his Bachelor of Laws with honours from the University of the West Indies and his Masters of Laws in Intellectual Property, Information Technology and Alternative Dispute Resolution from King’s College London, University of London.  He attended the Hugh Wooding Law School where he obtained the Certificate of Legal Education.  He was admitted to practice law in Trinidad and Tobago in 1996.

Prior to becoming the Attorney General and Minister of Legal Affairs of Trinidad and Tobago on September 9th 2015, Mr. Al-Rawi was heavily involved in active legal practice in particular in the areas of corporate commercial law, civil litigation, industrial relations, intellectual property, mortgaging and conveyancing law and securities.

Mr. Al-Rawi is a third generation Parliamentarian in that his mother Diane Seukeran and his grandfather Lionel Seukeran both served in the Parliament of Trinidad and Tobago.

He has been involved in the politics of Trinidad and Tobago since 1995 and has served in multiple capacities including on specialist appointed cabinet committees and as an Alderman of the Port-of-Spain City Corporation, a member of the Board of Directors of the Land Settlement Agency, the National Housing Authority and the Housing Development Corporation.

Mr. Al-Rawi first entered the Parliament of Trinidad and Tobago in June 2010 as an Opposition Senator and served as the Public Relations Officer of the Peoples’ National Movement for 2 consecutive terms.

Mr. Al-Rawi is a polyglot conversant in English, Arabic, Spanish and French.

He is a very strong supporter of various charities and in particular of the Scout movement and of the Trinidad and Tobago Karate Association of which latter institution he is a member and past instructor.